Sea kayaking and adventure racing conjure images of boiling waves stoked by unpredictable tempests, airborne racers thrown from the safety of warm cockpits into crashing surf, adjusted courses and canceled sections to the sorrow of many excited RDs. Rarely do such paddles work out the way they were dreamed of, the conditions never seeming to reflect the glorious days of scouting that are captured in enticing color photography and then used to lure adventurers near and far to sign up for and travel to a race.

As we drove up to the Maine Summer Adventure Race, we had enough information to suggest we would likely start on the water with the promised sea kayak, but the weather forecast was spotty at best. We wondered if our epic journey north from Philadelphia would pay us back with a shortened course lasting a mere five or six hours rather than the coastal journey along Maine’s stunning coast as promised by our friends Cliff and Kate from Strong Machine Adventure Racing, still new kids on the block when it comes to race directing but ones we trust to put on a high-quality event.

As the pre-race morning unfolded, questions continued: would the weather (forecast slightly improved) hold? Would the mist clear? Would the hour and a half delay thanks to a lost bus ruin the current’s push from the well planned convergence of race and high tide?

Thankfully, the AR gods conspired to reward Kate and Cliff’s hard work, and while the lighting may not have been picture-perfect, nor the tide as strong in our favor as they had hoped, the race started with a glorious paddle through the islands and channels outside of Boothbay Harbor. Abby, Tamela, and I navigated cleanly along the coast, picking off checkpoints, holding close with the chase pack (all were chasing Untamed New England who led from the gun), and spying ospreys as they flew overhead and landed in their nests perched on lofty posts and stands along the coast. We even had the pleasure of a brief encounter with a curious seal as we approached the first control. The journey had been worth it.

Competitively-speaking, we went into the race expecting to be left behind early by Untamed New England. A strong team of seasoned AR veterans and national champions, they had a notable advantage right off the bat as they were outfitted in two tandem kayaks. Our line-up of three was more a finesse one with me, Abby, and Tamela together weighing less than half of Jeff Woods, and we knew we would potentially lose the race on the paddle, figuring they might put half an hour or so on us. Biking too would be a challenge; during last year’s race, the Untamed team (a similar team to this year’s squad) opened up 45 minutes or so on us. We had our work cut out for us.

Abby, rearing and ready to go!

Additionally, there were several other good coed teams and a few all male teams we were aware of that would challenge for overall placing. Ultimately, after much back and forth discussion, Abby and I paddled our tandem, and we tethered Tamela in a single kayak to our boat. For the first 15 minutes, we struggled. As expected, Untamed quickly opened up a gap on the field, and a number of other teams were pulling ahead of us too. I finally decided to use the rudder, which, while less efficient, allowed me to compensate for some of the drag and push/pull of towing another boat. Once we fell into a new rhythm with the rudder, we settled in and found ourselves holding our own, more or less.

No one has ever worked harder to open a Ziploc bag…or protect a passport,

We worked hard throughout the section, and toward the end of the leg there was an interesting mini-foot section: two points on high-points, separated by a narrow 10 meter wide channel of water. We arrived to see Untamed waiting for their runner, and we quietly cheered that they hadn’t opened more of a lead. Another full course team, the NH Trail Vets had arrived a few minutes before us, and a handful of short course teams were already there. Abby and Tamela dropped me off to minimize the time in the water, and I set off for the first point, arriving there before the Trail Vets who had paddled into the channel further than we had. I nabbed the point, dropped quickly and elected to swim the cold channel of water. There was an unmapped trail network on these peninsulas, linked by a footbridge across the water, but I figured straight line would be quicker. 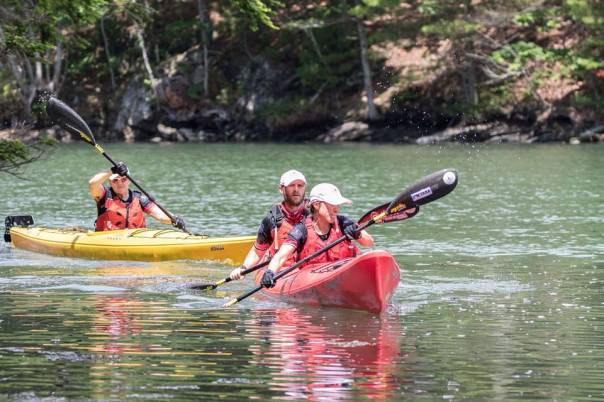 Rolling into the micro-foot section

I hit the water before Nick from the Trail Vets and was climbing out the other side when he splashed in behind me. I pushed up the hill and didn’t see him again. When I returned to the boat (Tamela and Abby had dropped me and then paddled across to the other peninsula), Abby reported Untamed had left 15 minutes ahead of us, maybe less; we seemed to have made up a few minutes, and we set off for the final few kilometers of paddling before the TA.

Next up was a long, linear trek with a number of optional and mandatory points scattered on and about a foot trail that essentially connected TAs. We quickly diverged off the mapped trail, finding our own way along a more linear course to the second CP. At the third control, GOALS (a two person male team for this race) caught us, charging up behind. We let them punch first and watched as they went off in a direction that would allow them to travel by trails for the next control, but we elected for a more linear off-trail route.

For the next hour or so, we were on our own, and as we attacked the final two checkpoints, we decided to roll the dice a bit. We had planned to hit these two CPs in a loop that would be longer but which would cut out a large open marsh crossing. At the last minute, we decided to gamble and we reversed it, once again traveling in a more linear course that would require us to cross the marsh. As we made our way to the second control on the edge of the marsh, we passed Untamed coming from the originally intended direction. And as we left the second control, GOALS appeared, also from our originally intended route.

We knew we had made up some time, and now it would come down to the marsh. While we have traveled through faster marshes than this one, we have also found ourselves in much  worse, and we made decent time, hitting the trail on the other side and taking off for a couple of kilometers more to the next TA. We wondered where Untamed and GOALS were, knowing that GOALS would probably be behind us but unsure about Untamed.  As it turned out, we rolled into the second TA several minutes ahead of anyone else, and we collected an orienteering map and set off for a loop of six or so points. 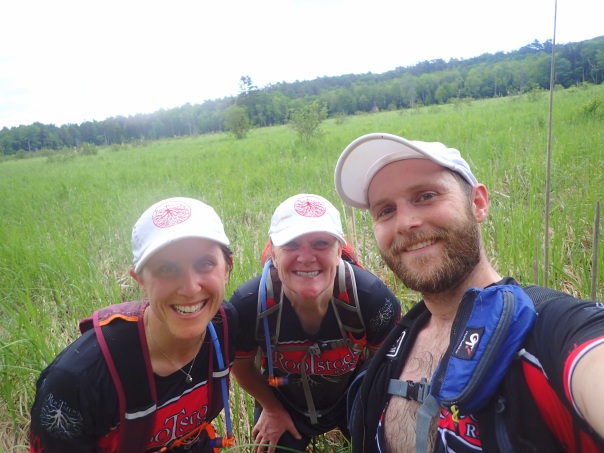 The first half of the loop went well, but as we hit the fourth point, I simply crashed. I had finished my food (having started eating my race food before the race began due to the late bus), and the heat and sweltering humidity had taken a toll. My energy began to rapidly wane, and then Untamed appeared right as I began to weaken. We slowed down for the rest of the orienteering loop, eating the remainder of what food we had collectively, trying to allow my body to recharge a bit. Sadly, I’d get no immediate boost of energy as sometimes comes with an injection of food and drink.

With Untamed now ahead of us, we figured we were racing to hold second. As I noted, based on last year’s race and the fact that we were not going to be breaking any speed records on bike as we were collectively dragging a bit, we had no expectation of catching Untamed twice, especially since the rest of the race was all on bike.

Downhill running was all I felt I had energy for, finishing up the O-section

So, we settled into the bike, slowly recovering over the hour and a half road ride back to the final TA and finish. When we arrived at the final TA, we were amazed to find that we were still in striking distance and that we had only given up a few minutes to Untamed on the ride. We looked over the final map and set off with no other teams in sight.

It would be exciting to say that we managed to pull off the comeback, but we didn’t. We did cross paths with Untamed once, at a point and with enough information to assume that they would beat us back to the finish, which they did. But we managed to finish second overall by a decent amount, one of only three teams to clear the entire course, and a full 90 minutes early. Additionally, our post-paddle race time was the fastest of the day, thanks to strong teamwork, efficient navigation (and some good and lucky gambles), and fast TAs. Happy with all of this, we enjoyed the great post-race spread put on by the RDs and Hidden Valley Nature Center, the gracious and stellar hosts for the Maine Summer Adventure Race.

Ultimately, it was a good final tune-up for the World Championship coming up next month. As was true last year, Kate, Cliff, and their team of volunteers from Hidden Valley and beyond put on a great event. The terrain is fun and interesting, and this year’s inclusion of the coastal paddle was truly special and spectacular. The checkpoints were perfectly placed, and lost bus aside (which was clearly the fault of the driver, not the race), the logistics before, during, and after the race were flawless. Rumor is, our friends from Strong Machine might have a 24 hour up their sleeve for next year. If they do, it will surely be one of if not the best 24 hour races on the east coast, and barring scheduling and life conflicts it will be at the top of our list for 2018.

Special congratulations to Untamed New England; racing is always best when you are neck and neck with another team, especially one that deserves your utmost respect, and doubly especially when you can count those people as friends. It was a blast going back and forth with them all day. Congratulations also to GOALS ARA for being the third and final team to clear the course (and for keeping us on our toes as they pushed us as well) and to all those new racers who made it to the finish. It was a long course in tough summer heat, and making it to the finish regardless of placement was no small feat.

Maybe next year, we can get that picture-perfect day for the sea kayak we have been waiting for for all these years.

Posted on July 5, 2017, in Uncategorized. Bookmark the permalink. Leave a comment.